Tesseract is hardly a name that is unfamiliar to the average Indian metalhead. They’ve played at the now hallowed GIR and opened themselves up to a relatively newer audience back in 2010. Since then a good portion of the metalhead populace here have jumped on this relatively new genre bandwagon. In spite of having several bands today aping them and with the genre having it’s own share of pitfalls, they will, and always stand apart from their peers. For they are simply a class unto themselves.

Now while on the threshold of releasing their second full length ‘Altered State‘ via Century Media Records, our very own Raj Sharma caught up with their new vocalist Ashe O’Hara. Now, the band’s been teasing their fans (rather tortuously) with extremely short yet brilliant clips of tracks from their new album. Although all of it seems to be alluding to some grand concept, which we are still unaware of, here is Ashe throwing a bit of light on it . 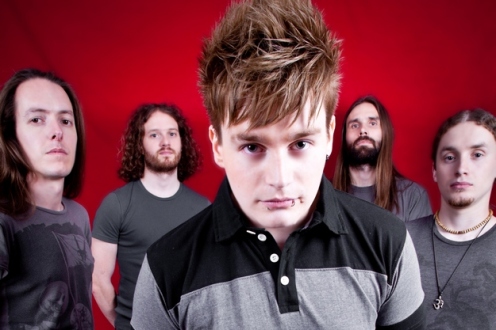 1. Greetings Ashe, with Altered State release date coming closer, how is the excitement level going at your end??
It’s been a crazy year for me, joining the band, going out on 2 small tours, one in the EU and one in the UK, and it’s been an amazing journey writing the album with the guys. It’s been complete for a few months now so we’re all very excited for this release and we are very excited to see how it is received.

2. What about growls or screams?? Are they really not happening with this release not even from the backings?
There won’t be any screams or growls on Altered State. The guys feel they are at a stage in their career, and have carved enough of a niche where they feel they no longer need to be afraid to be themselves. And right now, being ourselves is to have purely melodic vocals. With ‘One’ they felt they had to have harsh vocals in order to be accepted by the community. But, they’ve never really wanted to be that type of band. There’s nothing wrong with that style of vocals at all, but they never felt as happy with the tracks they created with screams as we did the tracks without screams. We will still perform the older tracks live with screams, as even though we’ve moved on a little they are still part of TesseracT, and the fans want to hear the older tracks. And who knows, maybe we’ll have some on future recordings. But, right now, it’s just not for us.

4. When exactly did you take up singing, what inspired you?? Was it the first interest in the music field or was it any other instrument??
I’ve always been singing as long as I can remember. I was nine when I wrote my first song and as you can imagine, it was bollocks. I wrote about stars and milky ways – I could have been referring to the chocolate [LOL]. The main key influences for me when I was younger were artists like Alanis Morissette, Queen – having my parents constantly blasting The Beatles and The Rolling Stones probably subliminally influenced me regardless of my distaste for that style of music! I’ve always been melody-heavy, and artists like Alanis, Anberlin, Thrice, Anathema, Dead Letter Circus and Karnivool are all styles I have stuck with and follow religiously.

3. Who came up with the idea of getting Chris Baretto and the use of saxophone in the album??
The idea of incorporating sax was something that has been rattling around for about 8 years with the band, around the time when Julien or Abi were fronting. Chris Baretto’s an old friend of the guys and I think it was a case of “We must have some sax – call Chris, he’ll know what to do!”, and it’s probably one of my favourite tracks on the album, mainly because of the fusion of the two very contrasting sounds feels very groundbreakingand enigmatic. I think Chris is ridiculously talented and I’m really hoping to work with him in the future – whatever that may be.

4. All the four states, Of matter, Of mind, Of reality and Of energy?? Give us a little insight on these states?? Also as a tease let the readers know which is the most grooviest state or say most fun state of the album in your opinion? For us we are sure the whole would be fun!!
The main theme of the album is change, the titles of the movements are such to inspire thoughts about the subject of change. Change on the very small, and microscopic or everyday scale of humanity – relationships and immediate concerns. As well as change on the infinite, macroscopic scale of the universe and eternity.
“Of Matter” is about a physical change that is obvious and tangible, like the change of a band member for example whereas “Of Mind” is about the internal change such as beliefs, and the struggles this can cause when pitched against other people who may not be willing or able to change. “Of Reality” is about the need to accept that things do and indeed have to change in order to survive, and “Of energy” is a muse of the inevitable destiny of everything we know; a slow burn away to nothing – Embers.
The band favourites currently would have to be “Of Mind – Exiled” and “Of Energy – Singularity”, my personal favourite would have to be the first movement “Of Matter” – it was probably the easiest to write, and it’s probably the most personal and resonates my most insular self.

5. You have released a solo track online sometime ago, very catchy stuff!! Do you plan to release more music solo later??
Absolutely! I’ve been writing for years and I have lots up on my Soundcloud account (www.soundcloud.com/asheohara). I always try to venture out to different genres and styles – I am a huge fan of techno and trance, and I love a good ballad too. I’ve done a lot in the rock and metal corner, and I am currently writing a concept album, which is very ambient, cinematic, special and tribal. Its been a very busy year with TesseracT and I am certain it will continue to be this way, but it’s helped me manage my time more effectively and has made me much more productive.

6. Your other band Voices from the fuselage, any more updates in that camp??
I founded VFTF with the boys just over three years ago, we are currently processing a line-up change (new bassist – nothing too drastic!) and we are writing our debut full length titled “Odyssey”, which is the astral story of a young boy who encounters an extraterrestrial being, who then takes him on a journey into the future and upwards to present to him the secrets of the universe and the importance of Earth and humanity’s specified road yet to come. We hope to have it released around this time next year.

7.What has influenced you the most as a vocalist/frontman??Is it any particular band/album/live DVD you want to mention about here, which has made a deep impact over you musically??
I have always been an unhealthily obsessed fan of Anberlin, mainly due to the writing. The melodies and harmonies are always beautiful, but the lyrics are so profound, and never fail to touch me on such a personal, emotional level. I would say their third studio album “Cities” is probably my favourite album ever, and their frontman Stephen Christian is an idol. I think with my current work, Karnivool really inspire me with how skilled and enigmatic they seem to be. Ian Kenny is absolutely flawless live, and I thoroughly look forward to their latest album. I am also a new, avid fan of Dead Letter Circus, and I love the grounds they seem to be treading.

8. Hows the touring life going along now?? Touring with Tesseract is hopefully getting you busy schedule, how do you make it up too being active at the same time with Voices from the fuselage??
Well! Touring is always a grey area – you either love travelling to all these wonderful places, or you hate being away from home and can’t stand being in a box on four wheels with a bunch of guys who take pride in their farts. This is what I have learned so far! [:P] I really enjoy it, and I am looking forward to the tour with Periphery – I do hope to make a good first impression, as they are incredible musicians, and I feel oddly intimidated by the idea of supporting them as much as I feel honoured!
The guys in VFTF have all been very supportive and understanding of my commitment to TesseracT, and we’re all very excited and eager to get our debut full length album out to everyone. We feel that it has been a long time since our EP “To Hope” (even if it’s only 15 months) and we want to give something new to our fans and we intend to spoil them with this album – it’s going to be long, and epic.

9. Shout out board : Tell us any bands or musician you want us to check out ??
If you haven’t heard of them yet – Dead Letter Circus will be taking over very soon! I hope to tour with them some time in the future. As always, check out Voices From The Fuselage – we’re available on www.facebook.com/voicesfromthefuselage. I am currently working with Keshav Dhar and Devesh Dayal (guitarists of SkyHarbor) on an EP with the band These Precious Days – of which there will be a preview released very soon, and you can check them out at www.facebook.com/wearethesepreciousdays.

10. Thanks a lot for Interview, Good luck with the album release. Any last words to the fans???
Thank you very much! And I hope you enjoy The Altered State, which is available on May 27th (EU) and May 28th (worldwide), and keep an eye out on www.facebook.com/tesseractband and www.tesseractband.co.uk for updates and some juicy surprises coming your way!

Watch all their new Altered State trailers below, in the sequence up-down (U-D) and lap up the secret message held within.