This is our first ever compilation review and sometimes compilations are better than single albums. Achintya Venkatesh talks about the latest compilation from Hypnosia titled Horror Infernal, released via I Hate Records. 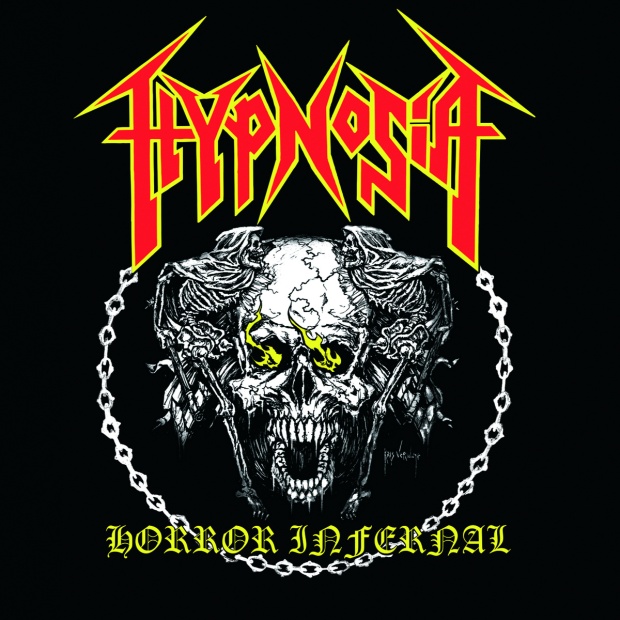 Växjö-based thrash metallers Hypnosia’s career span was indeed very much like the music they presented. With its genuinely no-bullshit approach, like a whirlwind that has hit you and gone you before you even realized what precisely happened, their releases created quite the furore in the underground, especially considering that they played a non-normative style of music at a time when it was considered passé, old-hat and non-trendy in a music industry swamped by the trend known as grunge. Thrash metal had taken a back seat and was merely a shadow of its glory days in the decade that preceded the time, but these Swedish war-mongers released a slew of pulverizing releases amidst an environment that was dominated by in-vogue grunge in the mainstream and extreme metal in the metal underground. Before they could be touted as the next big act, with merely a single studio album to their name, they decided to call it a day in 2002 and disbanded. Horror Infernal is a commemoration and in a sense, a remembrance of these forgotten underground heroes.

The opening track, ‘Crushed Existence’, from their rather successful 1996 demo of the same name is a straight-forward, speed-driven thrash metal number. Vocalist Cab Castervall sounds a great deal like Mille Petrozza of Kreator in its early days, albeit less dramatic in his vocal approach – think more Endless Pain as opposed to Pleasure to Kill. The next few tracks are also from the very same demo. ‘Threshold of Decay’ has a comparatively slower pace, and also features some lower growls as opposed to the regular screechy, raspy screams – much like Tom Angelripper’s effortless alternation between raspy chants and lower growls in a number of Sodom’s releases. ‘Undead’ is a more diverse track alternating between velocity-driven parts and slower, groovier, percussive segments, with ‘Paralyzed by Persecution’ being in a very similar vein. The compilation thereon moves onto The Storms demo, released in 1997. It doesn’t take long to realize the comparatively murkier nature of the production of this release as well as the shift in tuning. The three tracks here – ‘The Last Remains’, ‘Operation Clean Sweep’ and ‘The Storm of Dead Worlds’ are all very brief tracks, but very crushing with their back-to-basics, aggressive and minimalistic approach.

We thereon move onto their 1999 EP, Violent Intensity which begins with an intro titled ‘Funeral Cross’ that directly bleeds into the overwhelmingly fast and pulverizing ‘Haunting Death’. It is rather apparent that Hypnosia have upped the intensity at this point of their career, while at the same time gaining further adeptness in the technicality department, in effect making things more dynamic while retaining their basic thrash-tasting aural onslaught. The next track is a higher-tuned version of ‘Undead’, shifting from the demo’s lower C♯ tuning to a standard tuning and in fact sounds far more wrathful than the demo version that preceded it. ‘Perpetual Dormancy’ showcases some interesting rhythmic interplay between the guitars and the drums – amidst the chaotic speed, the band seems to almost charter into the territory of syncopation at times, and only further reinforces the raging and incensed mood of the song. ‘Mental Terror’ could’ve well been on Terrible Certainty and truly evokes mid/late 80’s Kreator – furious thrash metal embedded with dabbling in more mature, technically-oriented musicianship. ‘The Storms’ further continues this theme – adrenaline-fuelled thrash with a good measure of instrumental complexity and ingenuity, coupled with some well executed tempo changes.

There also two kickass covers on this compilation – ‘Outbreak of Evil’ by Sodom and ‘My Belief’ by Possessed. The first cover truly hits the spot and show-cases where exactly the band is coming from in terms of their sound. It simply rips. The Possessed cover is one of the slower numbers of the seminal death metal forefathers, but is also well executed nevertheless.

If speed-driven death metal tinged thrash metal is your drug, Hypnosia is certainly the to-go dealer. I can only imagine what a great band they must have been in their local scene, and should’ve made for a blistering live act, which the last track, a live rendition of ‘Haunting Death’ perfectly reflects. However, one often approaches bands that hail from an era that post-dates thrash metal’s zenith with a great amount of scepticism, being uncertain as to how successful the band in question is in avoiding the commonplace phenomenon of bands simply being rehash acts indulging heavily in sonic necromania. But the end result is rather positive, and Hypnosia presents a brand of thrash metal which exhibits the characteristics that has come to define the genre, namely velocity-driven, unrelenting ferocity and ruthlessness in the vein of Sadus, early Kreator/Sodom and Morbid Saint, while maintaining a fairly distinctive sound to their name. The production has also been well handled and the quality of the production is fairly congruous across the songs despite having originally been on different demos and EPs. This compilation is a must have for any self respecting thrash metal enthusiast, and should be of special interest to any heavy music enthusiast considering all of the songs precede the incessantly derivative retro-thrash metal movement that post-dates Hypnosia’s dissolution. Hypnosia will certainly be one of the bands in the ages to come that will be referred to in any discussion pertaining to the realm of death/thrash metal.

Stream the entire compilation below: