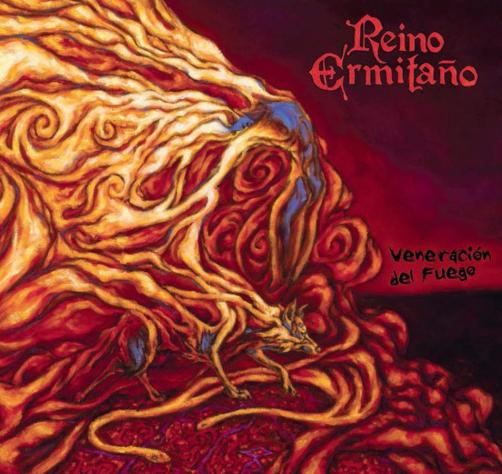 Pre-dating the recent trend of female-fronted doom bands by a decade, Peru’s Reino Ermitano have been flying the flag of fuzzy, riff-driven, mystical doom metal since their formation in 2001. I am not familiar with their back catalogue, having only heard their sophomore release, ‘Brujas del Mar’, so I wasn’t sure what to expect when I loaded their new CD into my player.

First of all, there’s the guitar tone – thick, heavy and with a satisfying backwash of fuzz. The bass tone is more glassy than I favour for doom, but blends nicely with the guitar. The drums aren’t a standout element, but they get the job done. The riffing clearly draws from traditional doom motherlodes – some Cathedral, traces of Saint Vitus and Pentagram, a dose of Wino worship, and a general atmosphere of lugubrious, mystical ritual. Need I mention that there’s some Sabbath in the mix? The vocals are sonorous, haunting, somewhat straightforward but very effective. The fact that I don’t understand the language the lyrics are penned in perhaps adds a touch of exotic mystery to the whole production, although it is not too hard to piece together the meanings of things  like the album title or song titles like ‘Quimera’, ‘El Rito’ or ‘Sangre India’. Or maybe it’s just that I’ve watched a lot of horror films from South American countries.

The songs here tend towards the drawn-out, with an average running length of around 7 minutes, but they never feel excessive. While the feel is pretty constant from start to finish, and the band doesn’t indulge in shifts for their own sake, there are enough distinctive and memorable sections sequences into each track to keep it interesting. The band strikes a happy balance between the sense of iterative stasis that is so crucial to true doom music and the dynamism without which that music can become a mere exercise in funereal texture with no real tension or allure. And solos of the quality and length of the one that stabs in around the 7-minute mark in ‘Quimera’ ensure that there is a payoff for the listened who has weathered the tectonic drift of Reino Ermitano’s songs.

Other standout moments are the keening, droning guitar textures on ‘El Sueño del Condor’, reminiscent of the more atmospheric expanses of certain death metal bands, when they slow it down, the swirling, Candlemass-goes-to-NOLA riff that opens ‘Desangrándote’, the elegiac violin solo on ‘Cuando la Luz te Encuentre’, or the epic ‘Sangre India’.

This one deserves to make it to more than a few best doom of the year lists. A strong, dynamic offering from a band that has honed its craft and is sure of the musical statement it is making.

Stream the entire album below: